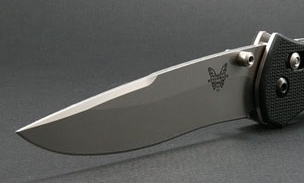 What is the best knife blade steel for the best pocket knife?!!

Well, I decided to do some research into all of the various alloying elements that are incorporated into various blade steels to see how the addition of each element affected the resulting steel alloy and quite frankly, I was surprised to see just how much the addition of as little of 0.1% of a particular element such as Vanadium can change the latent properties of a blade steel!

Here’s what I found…

So, to start my research, I first identified all of the various elements that are added to blade steel as alloys and I found that they consisted of Carbon, Chromium, Manganese, Vanadium, Molybdenum, Tungsten, Nickel, and Cobalt. In addition, I discovered that Carbon is the element that is responsible for chemically transforming iron into steel. Also, I also found that as it relates to blade steel, Carbon (expressed as C) is the single most important alloying element because a high carbon steel is significantly harder than low carbon steel and a presence of at least 0.5% Carbon is required for a particular steel to be considered a high carbon steel.

However, steel can only absorb a maximum of 0.8% Carbon and thus, the excess Carbon in extremely high Carbon steels serves to increase the hardness of the steel. Next, I discovered that Chromium (expressed as Cr) not only increases the hardness and edge holding ability of blade steel, when added in quantities of 12.5% or more, it also produces stainless steels. Next, I discovered that the addition of Molybdenum (expressed as Mo) increases the hardness of certain tool steels. Plus, during forging, Molybdenum and Chromium combines to form hard, double carbide, bonds which help improve the abrasion and corrosion resistance of the steel.

Next, I discovered that Vanadium (expressed as V) is added to help produce a fine grain during heat treat and that not only will it improve the wear resistance, it will also refine the gain for both good toughness and the ability to sharpen the blade to a very keen edge. In fact, many people report that they are able to get knives using steels that contain Vanadium noticeably sharper than they can non-Vanadium steels such as ATS-34 or 154CM. I also discovered that Manganese is added to almost all stainless steels as well as to most non-stainless steels to help increase the toughness and harden-ability of blade steels.

So how do I decide which is the best knife blade steel?

For those of us who are simply interested in purchasing the right knife for our intended purpose? Well, first of all, the amount of Carbon contained in a particular blade steel will determine if it’s a tough steel or a hard steel. For instance, a steel with 0.15% Carbon content is not likely to be a particularly hard steel and thus it would be a good choice for high impact blades such as axes and hatchets. However, if you want your knife to hold an edge, you need a steel with a with a Carbon content more along the lines of 1.15% which would make it a hard, high carbon, steel.

Also, noting the presence of Manganese combined with the Carbon in such steels as 1085 and 1095 (indicates 10 series steel with 85% or 95% Carbon) will also indicate a tough steel but not necessarily a hard steel and although these steels are not stainless steels, they are an excellent choice for hard-use survival knives, parangs, and machetes.

In addition, because most people prefer stainless steels over non-stainless steels due to their ease of maintenance, noting the presence and quantity of Chromium is another important factor when choosing a blade steel because steels containing greater than 12.5% Chromium are considered to be stainless. Plus, noting the inclusion of Vanadium into the steel is also important because the presence of this element will have a noticeable effect on the fineness of the crystalline structure of the steel and will result in a blade that will accept and hold a keener edge than steels that do not contain this alloying element.

However, simply being aware of the various alloying elements and their properties is not enough information to judge a particular blade steel by. Therefore, it is also necessary to have something to compare that information to. Thus, consider the composition of the following popular blade steels as a reference for your assessment of other blade steels:

Also, note that D2 has the highest Carbon content which makes it very hard and that AUS-8 has the lowest Carbon content which makes an excellent choice for large, heavy, general purpose blades and that 440C has an unusually high Chromium content which makes it extremely corrosion resistant. Thus, by understanding what alloying elements are commonly incorporated into blade steel and how those alloying elements affect the properties of the steel, you can gain a considerable amount of insight into how a particular blade steel will perform in the field and for what particular purpose it is best suited. Hopefully this helps in your search for the best pocket knife available.

3 thoughts on “What is the Best Knife Blade Steel?”