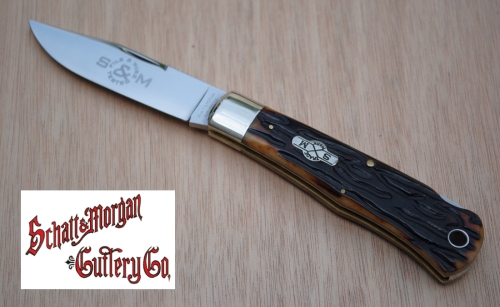 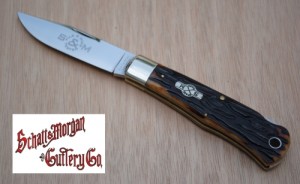 The Schatt & Morgan File & Wire series #3, edition #1, “Mountain Man Lockback” is one of my favorite folding knife designs due to both the history behind this iconic American knife brand and the quality of craftsmanship it displays. I’ve been really looking forward to writing this pocket knife review, because I absolutely love this knife; and, after some research, I discovered some interesting facts and history behind Schatt and Morgan knives. You can skip below if you’re more interested in their story. Anyways, without further delay, let’s dive into the review…

In my opinion, this knife is one of the finest hunting and/or every day carry (EDC) folding knives on the market today. Not only is the knife meticulously constructed, it is in my opinion, truly a work of art that is a pleasure to behold. When holding this knife in the hand, the first thing I notice is its considerable heft which seems to lend it a sense of quality. Next, the overall design and appearance of the knife displays considerable forethought and the choice of ATS 34 for the blade steel is unusual for a production folding knife.

In addition, the slip joint mechanism is one of the smoothest that I have ever experienced on a production folding knife despite the heavy duty main spring and the blade locks open with a very satisfying click. In addition, all of the exposed metal surfaces display a high degree of polish and the blade displays the Schatt & Morgan File & Wire Tested logo along with Schatt & Morgan Trade Mark shield inset into one of the jigged bone handle slabs.

The Schatt & Morgan Cutlery Company was initially founded as the “New York Cutlery Company” (not to be confused with the well known New York Knife Company) in an office in New York City sometime in 1895 by John W. Schatt and Charles B. Morgan. However, sometime in 1896 or perhaps early in 1897, they moved to Schatt’s hometown of Gowanda New York and, in July of 1897, they purchased the Platts’ cutlery plant there. (The Platts family then moved to Eldred Pennsylvania and on to various associations with the extended Case family.)

The company was then housed in Gowanda from 1897 until 1902 at which time they moved to the Titusville, Pennsylvania factory where they incorporated the business. By 1903 Schatt & Morgan was manufacturing 40,000 knives per year in the Titusville plant and had twelve salesmen on the road with sales all around the country according to newspaper reports of the day and several building expansions were undertaken to keep up with production beginning as early as 1907.

Thus, in less than five years, the company had doubled the size of their facility to keep up with an ever-increasing demand for their cutlery. But, unfortunately, World War I imepeded the growth of Schatt & Morgan due to the rationing of materials needed for the war effort and the shortage of skilled workers. In addition, the great influenza epidemic of 1918 also took its toll in Titusville and elsewhere. To make matters worse, the company was further crippled by the 1922 firing of five of their most skilled workers; all supervising department heads. These department heads apparently had been making skeleton knives (knives without handle scales) on the sly since around 1918 and then wholesaling them out on their own. But, they were discovered in 1922 and promptly let go. Consequently, these men then moved to a facility about a mile away and began manufacturing cutlery themselves under the name of Queen City Cutlery.

Thus, the Schatt & Morgan work force was subsequently reduced by about thirty percent from about ninety to sixty workers that year; probably as a result of firing those supervisors. Unfortunately, the firm of Schatt & Morgan went bankrupt in the late 1920’s, and was ironically purchased by Queen City Cutlery in August of 1933 at a sheriff’s auction. Thus, the fellow who had fired the five Schatt & Morgan supervisors wound up working or the very men he had previously fired! Since that time, the Schatt & Morgan brand name has been resurrected by Queen Cutlery and is now distributed by C. Risner Cutlery. Today, the brand name of Schatt & Morgan is widely recognized among knife collectors as some of the highest quality American-made cutlery in existence due to the use of high quality steels and meticulous attention paid to fit and finish.

I hope you enjoyed reading this pocket knife review and brief retelling of Schatt and Morgan’s history. I’m interested to hear your thoughts. Have any of you tried this knife? What did you think? See you in the comments.