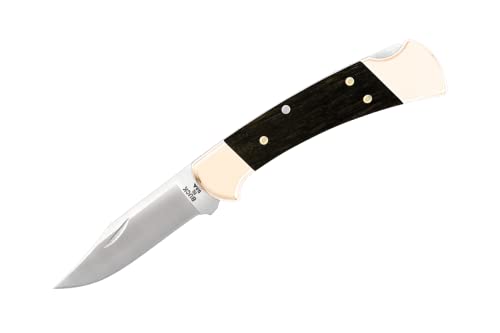 The Buck 112 Ranger is a folding knife that’s the smaller cousin to the Buck 110 folding hunter and is designed to appeal to users who prefer a shorter blade. Like its bigger cousin, it too is a timeless classic that measures 4 1/4 inches closed and weighs a hefty 5.6 ounces. In addition, it features an elegant, semi-hollow ground, 3 inch clip point blade made from 420HC (high carbon) stainless steel (Rockwell Hardness unknown).

It features high quality brass bolsters with rounded edges and increasingly rare Macassar Ebony wood slabs. Plus, since this knife was specially designed to be carried in the included black leather sheath, it was intentionally designed with a wide, hand-filling, grip that is as comfortable as it is elegant. Also, this knife incorporates a classic rear locking mechanism which was the first of its kind among commercially produced folding knives. So, what this knife lacks in fancy blade steels, sophisticated locking mechanisms, and assisted opening mechanisms, is easily compensated for with venerable history and sheer elegance.

In fact, the Buck 112 Ranger has been around for as long as I can remember and in my opinion, like its larger cousin, it is one of the most elegant, commercially produced, folding knives on the market today! Also, in my opinion, the 3 inch clip point Bowie style blade with its semi-hollow grind is one of the prettiest and most useful blade designs I have ever seen on a folding knife and is little handier for smaller jobs than the 3 3/4” blade found on the 110.

Since this knife was specifically designed for hunting, the clip point blade shape combined with the extended blade length and the perfectly shaped sweep make this knife an excellent choice for skinning game as well as for use as a companion to a fixed blade knife for hunting and/or outdoor survival.

Where this knife really shines is as an everyday carry knife since the leather sheath keeps it in plain sight and yet easily accessible when you need it and, it’s such a versatile design that you will find yourself reaching for it again and again throughout the day! In addition, the use of high quality brass bolsters (achieved by using a high tin content) combined with the dark Macassar Ebony wood slabs nicely compliments the overall appearance of this knife.

Since this knife was designed to be carried in a sheath on your belt instead of in your pocket, it has a nice, wide, very comfortable, grip that was specifically designed to fill the hand for a positive grip and to reduce fatigue when using it for extended cutting tasks. Also, while the classic “nail notch” locking mechanism is considerably less sophisticated than some of the other designs available today, it is none the less a reliable locking mechanism that is certainly adequate for its intended purpose.

So, while the Buck 112 Ranger may not be as sophisticated as some of the other folding knives on the market today, it is a classic example of the evolution of the folding knife that every knife aficionado and/or collector should own. Also, due to the increasing rarity of the Macassar Ebony tree, it would be a wise idea to purchase yours sooner rather than later because once Buck is forced to change the handle material, these knives are sure to escalate in value accordingly.

Buck Knives was started by a young Kansas blacksmith’s apprentice named Hoyt Buck who was looking for a better way to temper steel so it would hold an edge longer and his unique approach produced the first Buck Knife in 1902. To start with, Hoyt made each knife by hand using worn-out file blades as raw material and his handy work was greatly appreciated among civilians during World War II. Then, after the war, Hoyt and his son Al moved to San Diego in 1947 and set up shop as H.H. Buck & Son.

Then, in 1964, Al Buck revolutionized the knife industry by introducing the Model 110 Folding Hunter and his folding “lockblade” knife made Buck a leader in the cutlery industry. Although Hoyt and Al Buck’s ingenuity may have put the company on the map, it is their ongoing commitment to developing innovative new products and improving what they already have by third and fourth generation Buck family members that have made Buck the successful knife maker it is today.

Although the Buck model 112 Ranger is a venerable classic design, it is still very popular today.