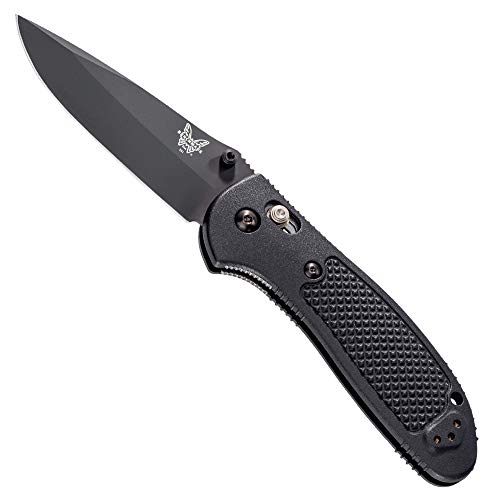 The Benchmade Griptilian 551 folding “thumb knife” features an overall length of 8 inches when open and 4 5/8 inches when closed and has a satin finished, non-serrated, modified drop point blade that measures 3 1/2 inches in length that is made from 154CM stainless steel hardened to 59 to 61 Rockwell. In addition, the blade features ambidextrous thumb studs and Benchmade’s Axis locking mechanism which is a patented Benchmade exclusive feature.

A 100-percent ambidextrous design, AXIS gets its function from a small, hardened steel bar which rides forward and back in a slot machined into both steel liners. The bar extends to both sides of the knife, spans the liners, and is positioned over the rear of the blade. It engages a ramped, tang portion of the knife blade when it is opened. Two omega style springs, one on each liner, give the locking bar its inertia to engage the knife tang. As a result, the tang is wedged solidly between a sizable stop pin and the AXIS bar itself and it is available in manual, assisted, or automatic configurations. In addition, it comes standard with a black Noryl GTX grip (but is also available with Grivory grips) and 420J stainless steel liners with a reversible steel pocket clip.

After viewing this knife and reading about is many innovative features, I have to admit that I am impressed. While I have always been aware of Benchmade’s reputation for producing fine quality knives, the choice of 154CM stainless steel for the blade combined with the Axis locking mechanism places the Griptilian 551 at the apex of production folding knives. For those of you who are not familiar with 154CM, it was originally developed for use in making turbine fan blades for jet engines. Thus, it had to be specially formulated to operate at red hot temperatures under centrifugal forces that would cause a lesser steel self destruct. Consequently, flaws in the metal are simply not acceptable and thus, this steel is melted in a vacuum and then drop-forged into bar stock which is then purchased by knife makers. In addition, the first person to experiment with this steel for knife blade use was a renowned custom knife smith named Bob Loveless who was a contemporary of Bo Randall who is considered by many knife aficionados to the father of the modern custom knife industry.

About the Benchmade Knife Company

Although the Benchmade Knife Company, Inc. set-up shop in Clackamas, Oregon in 1990, they were originally founded in California in 1988. The initial knives primarily consisted of Bali-Song® knives, using a combination of outside vendors and inside processing to build finished products. Like most companies, starting out meant scarce money and big plans using second hand equipment and limited resources. Soon, a natural born fortitude and an undying passion to make the best knives in the world led to significant growth. As their product line grew so did their in-house capabilities. They began to acquire new machines and technologies including the first of several lasers; making Benchmade the first knife manufacturer to have such equipment in-house. Open minds and positive attitudes would lead to several more industry firsts over the course of the next several years.

However, this was only the beginning of Benchmade’s breaking of new ground in the manufactured knife market by using non-traditional materials and modern manufacturing methods in not only building knives better but, inevitably, building better knives. Consequently, their “Designer Series” was first introduced in 1991 with several custom designs being manufactured. By tapping into the custom knife makers’ knowledge and combining it with their manufacturing expertise they were more readily able to offer more contemporary knife designs and innovations to knife users.

Then, consecutive years of aggressive growth led to the next logical step in 1996 when Benchmade moved into their own 35,000 sq. ft. facility and in 2011, an additional 20,000 sq. ft. of manufacturing space was added and the entire factory was awarded the prestigious LEED Gold certification from the Green Building Council. Today, Benchmade Knife Company, Inc. manufactures knives for a loyal and ever growing following of knife users around the globe. Our commitment to world-class quality embodied in our well known motto: “It’s Not Just a Knife. It’s a Benchmade.” Likewise, the Griptilian displays Benchmade’s commitment to quality knife production.

Since then, it has replaced 440C as the pinnacle knife steel for custom knife smiths. In addition, because of its composition, it can be made extremely hard as is evidenced by Benchmade’s 59-61 Rockwell rating for the Griptilian. In addition, the very ergonomically designed Noryl GTX grip is impervious to scratching, cracking, chipping, immersion in water, and changes in temperature. Thus, it is conceivable (but not likely) that after many years of use, you might possibly wear the pivot pin down but, the rest the knife will be around long after you are gone.

It can safely be said that this is an heirloom quality knife that you can pass along to your children or grandchildren. In addition, the 3 1/2 inch modified drop point blade makes this knife imminently useful as either a tactical knife or an everyday use knife. However, in my opinion, the sweep of the blade lacks enough belly to be a good skinning knife for hunting or outdoor survival use. On the other hand, the grip is very ergonomically designed and was obviously designed with knowledge of the human hand in mind.

Consequently, in my opinion, the Benchmade Griptilian 551 is an exceptional quality folding knife that I would be proud to carry. Also, the innovative Axis locking mechanism in addition to their use of top knife steels such as 154CM and D2 further displays their commitment to producing some of the finest quality production folding knives on the planet. In fact, I would even go so far as to say that the quality and innovative features of this knife are superior to the majority of custom knife smiths working today. So, if you are looking for an exceptional quality folding knife for hard use, checkout the Benchmade Griptilian, it will certainly fit the bill.