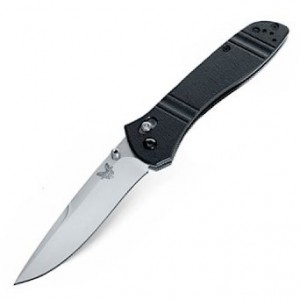 The Benchmade 710 McHenry Williams, unlike the majority of pocket knives,  is designed to be a sportsman’s and outdoorsman’s knife instead of a tactical folding knife. As a result, it features an overall length of 8 3/4 inches when open and 4 7/8 inches when closed and it has a satin finished, non-serrated, modified clip point blade that measures 3 7/8 inches in length and is made from D2 semi-stainless tool steel hardened to 60 to 62 Rockwell (wow!). The blade features ambidextrous thumb studs and Benchmade’s Axis locking mechanism which is a patented, Benchmade exclusive, feature.

A 100-percent ambidextrous design, the AXIS locking system obtains its functionality from a small, hardened steel bar which rides forward and back in a slot machined into both steel liners. The bar extends to both sides of the knife, spans the liners, and is positioned over the rear of the blade when it is opened. There, it engages a ramped, tang portion of the knife blade and two Omega style springs (one on each liner) provide the locking bar with the inertia needed to engage the knife tang. As a result, the tang is wedged solidly between a sizable stop pin and the AXIS bar itself and it is available in manual, assisted, or automatic configurations. In addition, this knife features 420J stainless steel liners with black, Noryl GTX, grips (but is also available with Grivory grips) and it comes with a reversible steel pocket clip.

check the latest prices with savings of 17% for the 710

The Benchmade Knife Company set-up shop in Clackamas, Oregon in 1990, but the company was originally founded in California in 1988. Its original range consisted of the Bali-Song® knives, which were manufactured using a combination of outside vendors and inside processing to build finished products.

Like most companies, starting out meant scarce money and big plans using second hand equipment and limited resources. Soon, a natural born fortitude and an undying passion to make the best knives in the world led to significant growth. As the Benchmade product line grew so did their in-house capabilities. Thus, they began to acquire new machines and technologies including the first of several lasers; making Benchmade the first knife manufacturer to have such equipment in-house.

Open minds and positive attitudes would lead to several more industry firsts over the course of the next several years. However, this was only the beginning of Benchmade’s breaking of new ground in the manufactured knife market by using non-traditional materials and modern manufacturing methods in not only building knives better but, inevitably, building better knives. Consequently, their “Designer Series” was first introduced in 1991 with several custom designs being manufactured. By tapping into the custom knife makers’ knowledge and combining it with their manufacturing expertise they were more readily able to offer more contemporary knife designs and innovations to knife users.

Then, consecutive years of aggressive growth led to the next logical step in 1996 when Benchmade moved into thier own 35,000 sq. ft. facility and in 2011, an additional 20,000 sq. ft. of manufacturing space was added and the entire factory was awarded the prestigious LEED Gold certification from the Green Building Council. Today, Benchmade Knife Company, Inc. manufactures knives for a loyal and ever growing following of knife users around the globe. Our commitment to world-class quality embodied in our well known motto: “It’s Not Just a Knife. It’s a Benchmade.” Therefore, the Benchmade McHenry Williams folding knife definitely displays Benchmade’s commitment to quality knife production. 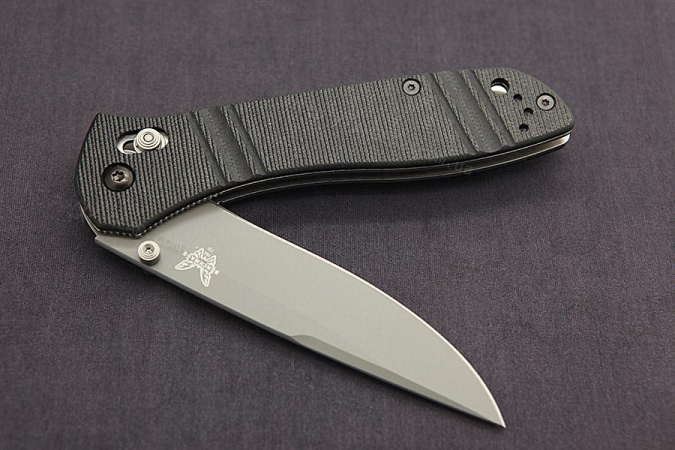 Key features of the Benchmade 710

While I have always been aware of Benchmade’s reputation for quality craftsmanship and attention to detail, honestly I have never paid much attention to them until recently. In fact, when I first brought up their web site and viewed their selection of knives, what my mind saw was a bunch of tactical folders. However, I am a professional outdoors man and thus, I have no use for a tactical knife unless I am bow hunting for feral pigs and then I carry a BIG bowie knife as opposed to a folder! But, then I decided to take a closer look at the Benchmade line through the eyes of a professional knife aficionado and I have to admit that I was forced to change my opinion a bit.

So, after looking the entire Benchmade line, I noticed that I kept coming back to the McHenry Williams model. Therefore, I decided to give it a closer look and I was immediately impressed with this knife! Just reading the specs felt like I was custom designing my own folding knife and the long, modified, clip point, blade shape is an excellent choice for a companion knife to either a large, fixed blade, hunting knife or a large, survival knife. In addition, the choice of D2 steel for the blade is a stroke of genius since D2 contains 12% Chromium (requires 14% to qualify as a stainless steel) and thus, it is an excellent working knife steel since it is reasonably corrosion resistant and yet, it’s also a very tough steel due to the fact that the foundry alloys the steel with both Molybdenum (Mo) to increase hardness and Vanadium (V) which helps to produce fine grain during heat treat and also improves wear resistance. Also, it refines the gain for both good toughness and the ability to sharpen the blade to a very keen edge.

In addition, many people report that they are able to get knives using steels that contain Vanadium shaper than they can non-Vanadium steels like 154CM and ATS-34. Plus, during forging, Molybdenum and Chromium (Cr) form hard, double carbide, bonds which help improve the abrasion and corrosion resistance of the steel. In addition, the very ergonomically designed grip is made from Noryl GTX slabs over stainless steel liners and the Noryl GTX material is nearly impervious to scratching, cracking, chipping, and is impervious to immersion in water, and changes in temperature.

It is conceivable (but not likely) that while after many years of use you might possibly wear the pivot pin down, the rest the knife will undoubtedly be around long after you are gone. Thus, I believe that it can safely be said that this is an heirloom quality knife that you can pass along to your children or grandchildren. In fact, my only complaint with the entire knife is that I would like to see a little more belly in the sweep since it is bit too shallow as is.

–>>Check the latest pricing, with savings of 17% for the Benchmade 710 Pocket Knife